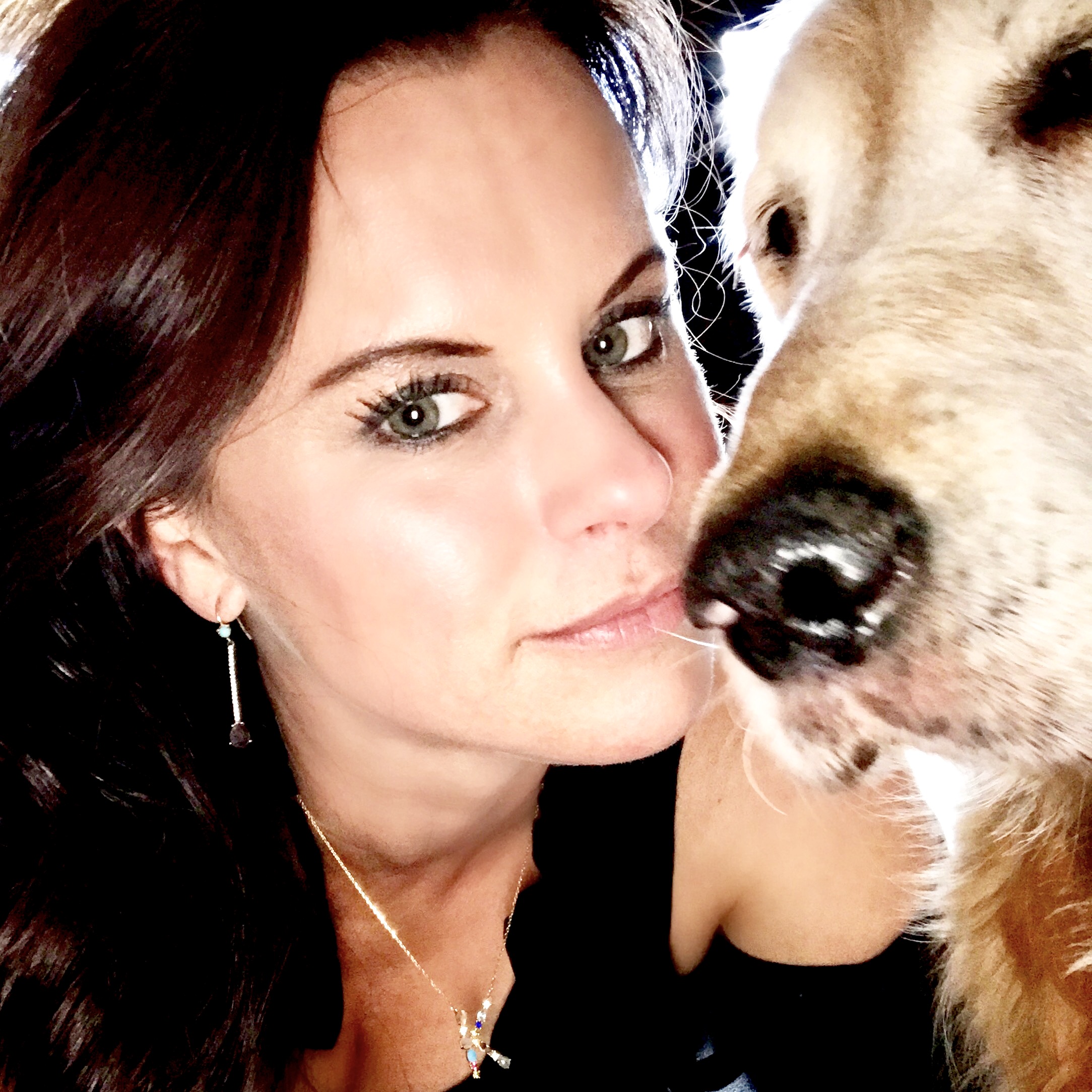 Regardless of whether you believe everything happens for a reason or not, there are times when the stars align perfectly. When the world appears to be amazingly orderly and well-orchestrated, when things work out in a manner that is so…very…right, that dismissing it all as mere coincidence seems presumptuous, perhaps even naive. This is a story about loss and love, hurting and healing, and opening your mind to possibilities that may not be as perfect as you pictured, but just might be more magical than you had imagined.

The Fielder’s Golden Retriever, “Dallas Heart of Gold,” had been part of their family for 11 years. Dallas was a staple in their children Bella and Harry’s lives; He grew up with Bella and when Harry was born he welcomed him home from the hospital. Dallas was a constant companion, he befriended their other animals, and for a longtime – all was well. But when Dallas’ gait grew strained and he began to seem uncomfortable, the Fielders, longtime animal lovers, knew from experience that a vet visit was in order. And when they took Dallas in to the vet, his diagnosis was cancer.

As many people who have loved a pet know, our animal companions will often fight it out a little longer just to please us. Dallas’ cancer was very aggressive and after about 5 weeks his pain was palpable. The Fielders realized it would be selfish to keep him around any longer, as he was clearly ready to cross the rainbow bridge. It was February 14, 2017, Valentine’s Day. So rather than celebrating the holiday with candy and flowers, Kathy spent the day on the floor with her dog, looking into his eyes, petting his back, and preparing to say goodbye to her precious friend. The family told Dallas how very loved he was and always would be, and then it was time for the vet to release their boy from his pain and this earthly life.

That night at a family Valentine’s Day dinner, they decided that as much as they were hurting, there were too many homeless animals out there and they needed to make room in their hearts and their house for another dog. They decided if their new dog was a girl she would be Lola and if it was a boy he would be Beau. Kathy, not one to sit idle, began scanning Golden rescue sites, and the next day, staring at her from the computer, was a beautiful dog who bore an uncanny resemblance to her Dallas. The dog’s name was listed as Beau. Kathy looked at her husband and family and said, “That’s our dog, I found our DOG!” The others were a bit taken aback because while indisputably beautiful, the dog was a senior, and they had just lost a dog a day ago. But Kathy stood firm and the family went to meet “Beau”. 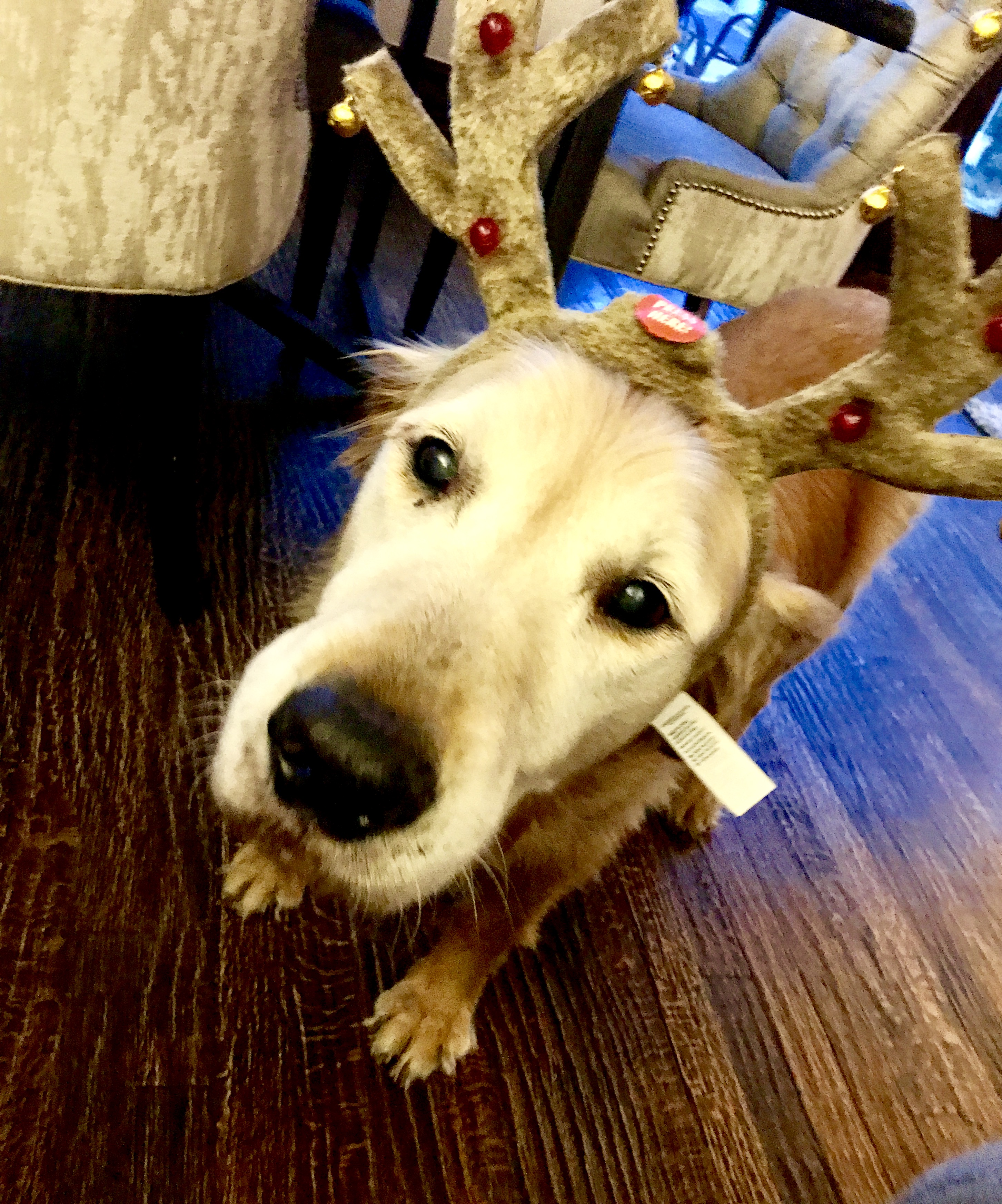 Beau was a sweet but sad creature. His longtime companion, a homeless man whom he had lived with, had recently been killed. The woman who rescued Beau explained to the family, “He was actually called ‘Bo’, but he was just so…special, I decided to rename him ‘Beau’”. Then they learned that ‘Bo’s’ person had tragically passed right around when Dallas was diagnosed. It seemed like more than a sign, in fact it appeared Dallas was orchestrating it from above. 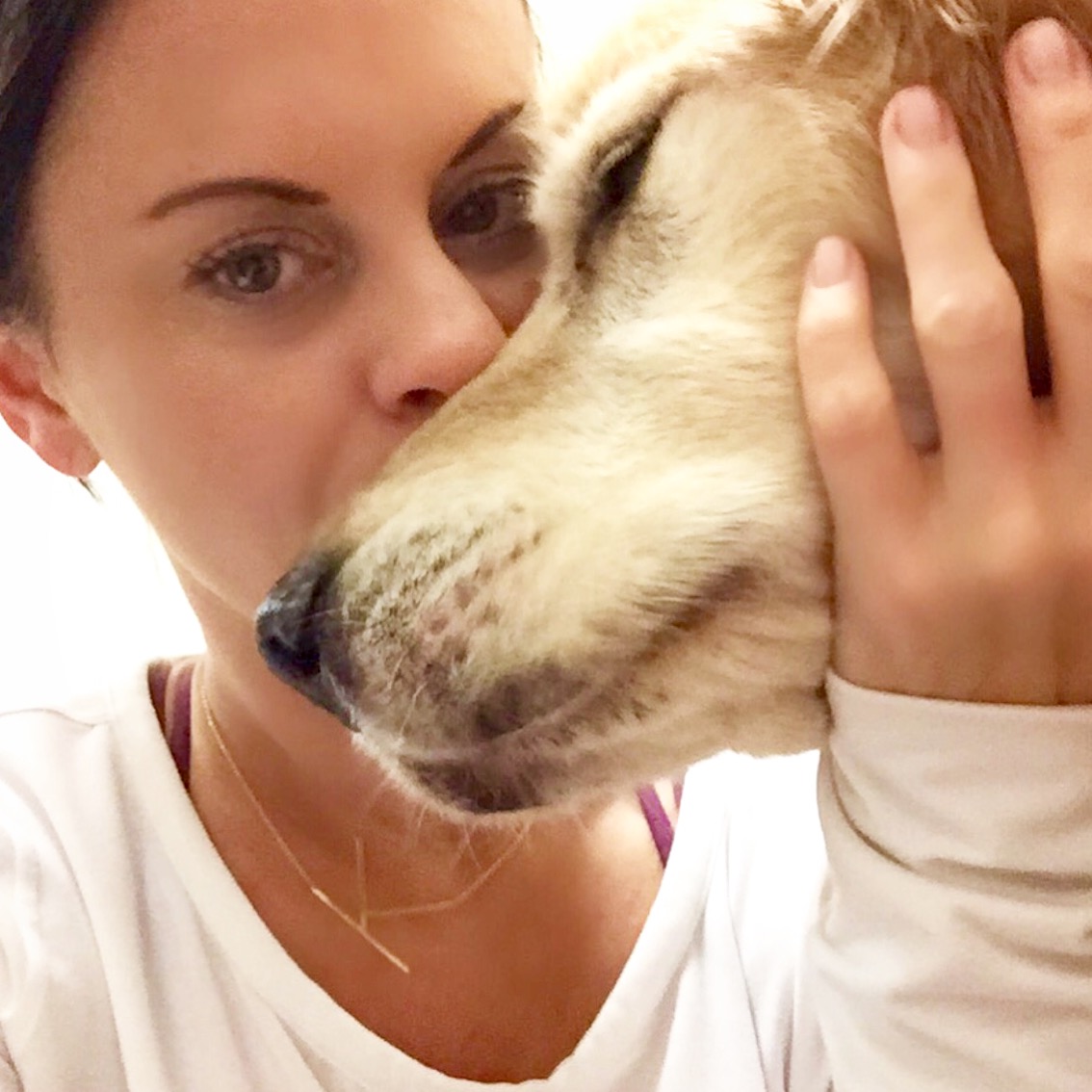 Kathy describes the vetting process of adopting a dog through Golden Rescue to be long and thorough. But once they were approved they took Beau home. Although Beau missed the man he used to live with and seemed a bit confused, he began to warm to life at the Fielder house. He enjoyed the dog they already had at home, Earnest Hemmingway, their cats, and their children, too. Over time, Beau grew comfortable and started to seem at ease with the family. He began to accept simple invitations to join the family on the couch. Kathy said it was a turning point this past Super Bowl Sunday.  Beau sat on the couch with her, rested his head on her chest, and fell asleep.

“Sure, we pictured a puppy, sure we want a lot of years, but as I said, I knew this was OUR DOG. I wasn’t about to question that. He is here now, he is perfect, and I know there is a little bit of my boy Dallas in him as well”. So, as it turns out, maybe grief can include a gift. Maybe what we think and what we know don’t always align. Perhaps, more importantly, being open to a love we didn’t picture can be the best present we have ever received. So, cheers to Valentine’s love stories, to Cupid’s arrows, to Cupid’s Beau(s), and to sweet fairy-tail endings. 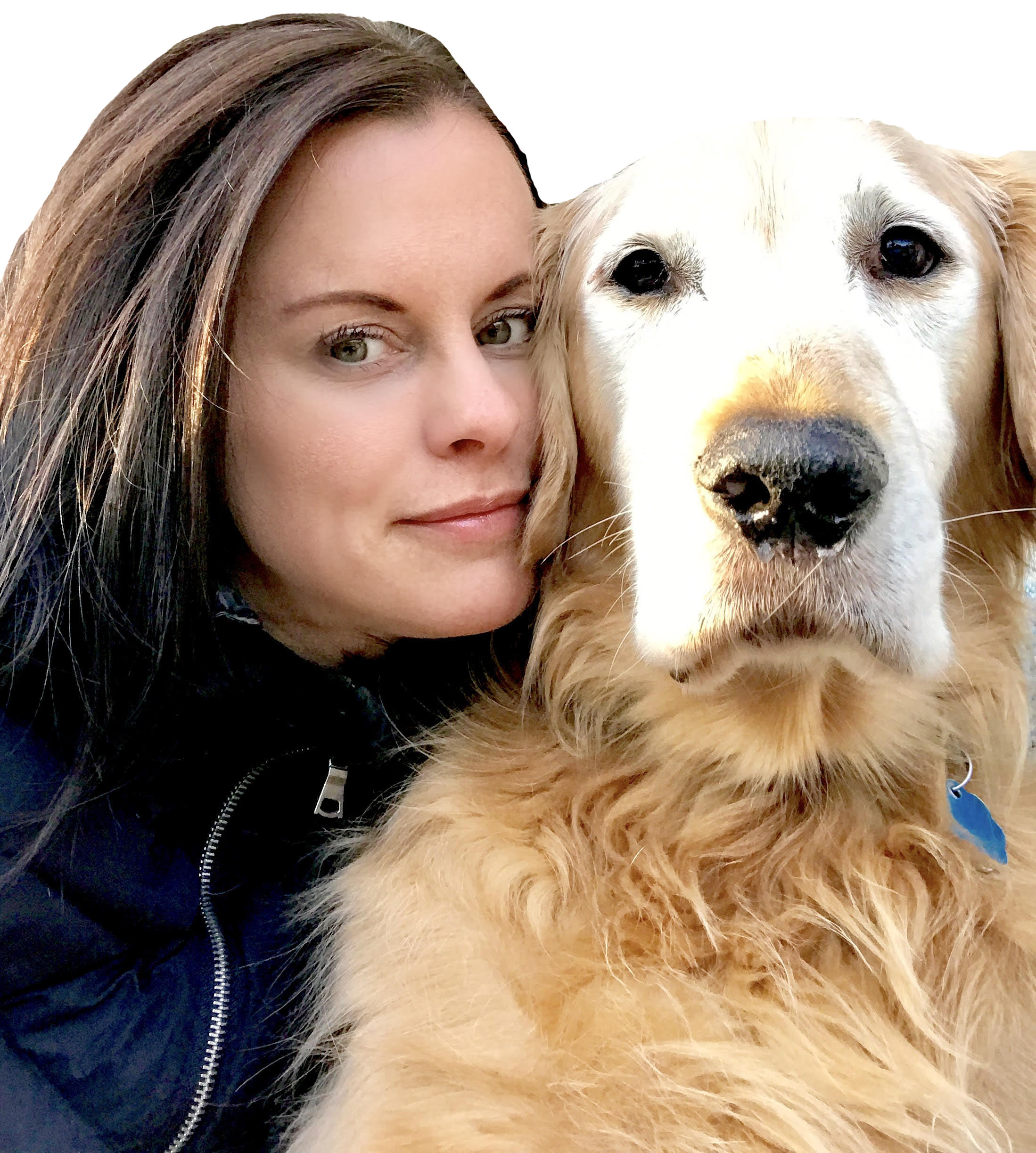 Abra Liberman Garrett is a writer, wife, mother, yogi, and community activist. Dear friends, Abra and Kathy bonded over their shared love of family, philanthropy, fashion, giving back, and vanilla vodka sodas with a mandarin twist. Abra, a  freelancer for various publications such as Modern Luxury, looks forward to future collaborations with KF. 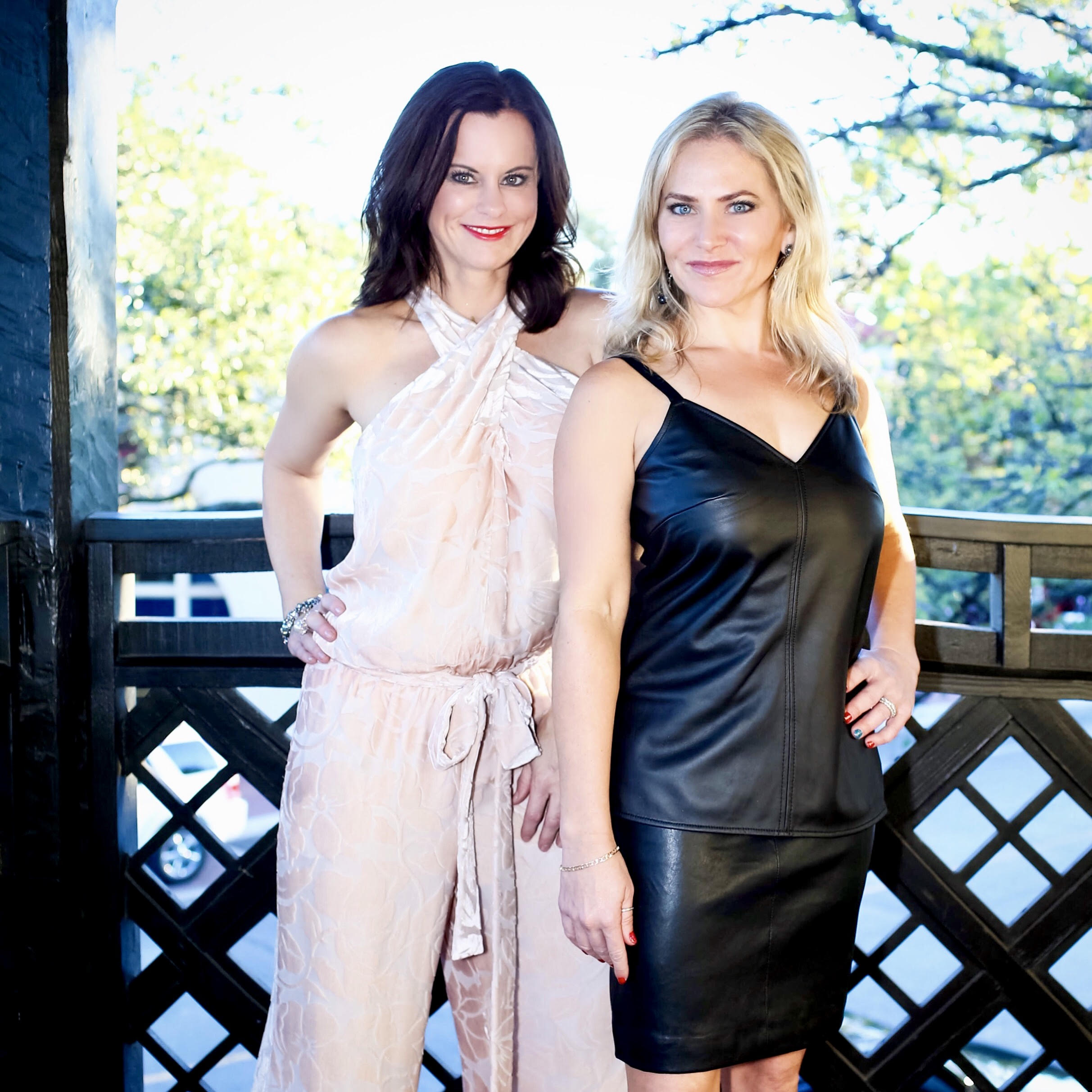 Abra and KF at a recent photoshoot for a charity event.

You can contact the Golden Retriever Rescue of North Texas here!